I decided I want to try something a little more challenging. So why not a airplane? When I was young I made a balsa wood model of a Supermarine Spitfire. It took me days to make, the result was pretty good, and it was a lot of fun. I figured why not try to make the plane again only out of Coroplast plastic.


The first thing I did was Google 'spitfire plans balsa wood', and found this...

With the first attempt I cut out plastic in the approximate shape of the plane and started gluing. The fuselage I simply glued three pieces side by side. The wing and horizontal stabilizer (rear wing) is one layer of plastic. The prop is a simple cross and the landing gear is two small circles on sticks.
What turned out is ugly as sin, but it kinds looks like a Spitfire, and I learned a lot making it.


The next attempt was like the first only I used 5 layers of plastic at different lengths to try to match the shape of the fuselage. I split a sheet of Coroplast down the middle. Cleaned out the remaining ridges and attached strips to the plane to give it a sleeker look.
I glued strips of plastic over the edges of the wings and tail to hide the hole. For the propeller is five pieces, glued closed at one end and attached in a 'star' shape to the nose cone.
It is definitely coming along. This second try does look a lot better, but it is still not quite right.

Version number three. Like the last try I used 5 layers of plastic at different lengths to try to match the shape of the fuselage. Once again I split a sheet of Coroplast down the middle and cleaned out the remaining ridges only this time I wrapped the sheet around the fuselage. It gave me nice rounded edges and a very sleek look. Now it is getting dialed in.
The strips glued on the open edges looked wrong. This time I filled in the holes with hot glue. It took three coats to cover, with a little excess cut off. It looks much better than strips.
The propeller is once again five pieces, this time glued completed flat to look more like a propeller blade. The props are individually attached in a 'star' shape to the nose cone.
The addition of cannon and machine guns, plus a canopy and some paint, and it is really coming together. It is amazing how a little bit of paint can make a model come alive. It is almost there but it is still not quite right.

Here is the last try. I liked how things turned out so I did everything the same as version three. I was just a little more careful with the glue and cutting. A little more elaborate paint job and PRESTO. A World War II British Spitfire ready to take to the sky.
So you can more easily tell the diferences between each attempt. Here they all are side by side. 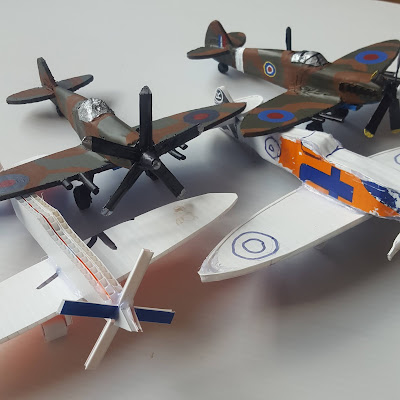 Please check out our other sites - HalifaxSportsPhotos.caTippinators.comCoroplastCreations.com

Here is my first attempt at creating something from Coroplast®. I made a suit of chain mail armour for Halloween. I also made a chainmail coif but still the costume was lacking something. While I was off for a couple of months due to the Covid19 lockdown I decided to try to make a helmet from an old Coroplast® sign from work. This is how I make the helmets -  How to Make a Cosplay Crusader / Templar Helmet After a couple of weeks of swearing, cutting my hands with a box cutter, and burning my fingerprints off with a hot glue gun, I came up with this. Knights Templar DYI Helmet The final result turned out pretty good... for a first attempt. I learn from my mistakes, so I know I can do better. Cosplay Knights Templar Please check out our other sites - HalifaxSportsPhotos.ca Tippinators.com CoroplastCreations.com

I received a couple of inquiries about exactly how I make my cosplay Knights Templar / Crusader / Great Helm helmet out of old discarded Coroplast® real estate or election signs. Since it was raining this weekend I figured I would make one and photograph the process. If you read through these instructions and have any specific questions please let me know. This is intended to be a rough guide on how to make a Templar Helmet from old plastic. The measurements shown are the ones I used for this build. You will have to adjust things for your project. Keep in mind that I figure this stuff out as I go, and kind of wing it. In the back of my mind I know things that are too long, or short, or crooked, can always be cleaned up/fixed later. If not then I can always start again. Remember you are creating something cool out of other people's trash.... Have fun with it. T 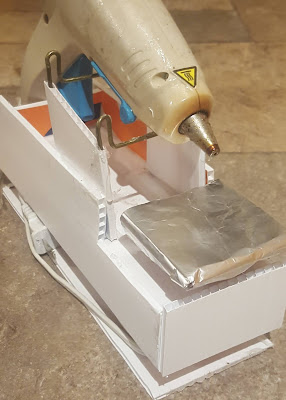 This glue gun holder I made from the scraps of another project, which itself was made from garbage. I am single handedly saving the planet by reusing items already recycled. has made this entire process so much easier. A piece of old coat hanger bent to shape keeps the hot end of the gun off the plastic. An elevated drip tray in the front catches those annoying drips, coating the tray in tinfoil makes clean up a breeze. A slot for 12 glue sticks is in the back making refilling quick and easy. Plus a compartment on the bottom to house the cord while not being used. This little holder has made working with Coroplast sooooooo much easier. It is easier to work on the projects and easier to clean up when done. Added 05/17 - after orgiginal post